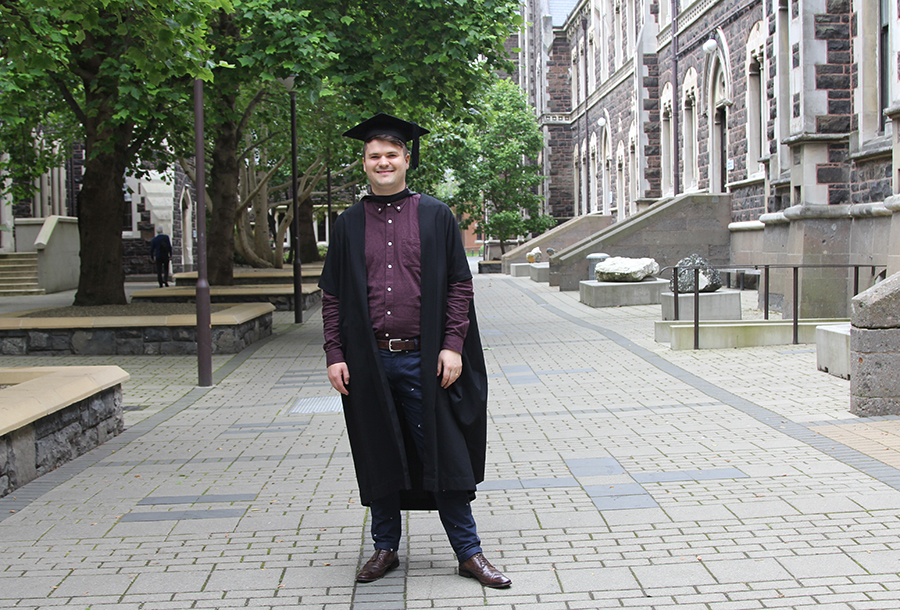 Although he may have once dreamed of bringing great tales to life on the silver screen, Masters of Arts graduate Iain Sutherland says he is pleased earlier dreams of becoming a screenwriter were never realised.

“I discovered I much preferred research and academic writing,” he says.

This love of study saw him complete an honours studies in English at Otago before undertaking a master’s thesis exploring how, in New Zealand, Irish playwright Sean O’Casey’s work was perceived in much the same way as Bernard Shaw’s in the inter-war period.

O’Casey was labelled “British”, which nullified the working-class, socialist, and distinctly Irish themes in his work, Iain says.

Iain’s thesis, entitled The Reception of Sean O’Casey’s Early Works in New Zealand (1924–47): A Social, Cultural, and Political Reading of the Archive, was supervised by Professor Peter Kuch, the Eamon Clearly Chair of Irish Studies.

What does your research discuss?

My thesis explores the complex network of amateur theatre societies in New Zealand during the interwar period (1919 to 1939). Since we didn’t have professional theatre here until 1952 – when the New Zealand Players were formed – theatregoers were forced to find their own way of seeing the ‘latest’ plays on stage. Especially as film technology began developing at an astonishing rate, thespians also found themselves in competition with Hollywood cinema. As my research shows, groups like the Workers’ Educational Association and the New Zealand Repertory Society believed it was their mission to preserve and reassert the cultural relevance of theatre.

I wanted to see how this network would respond to the controversial Irish working class playwright, Sean O’Casey, whose plays were both critically acclaimed, yet also popular enough to warrant film adaptations from directors Alfred Hitchcock (1930) and John Ford (1937).

O’Casey’s early plays retold the events of the Irish Revolutionary period, from the 1916 Easter Rising to the end of the Civil War in 1923, and explored the perspective of the Dublin working class. Although Sean O’Casey never visited New Zealand, his plays — The Shadow of the Gunman (1923), Juno and the Paycock (1924), and the Plough and the Stars (1926) — were popular here.

Despite the obvious political, socialist message in O’Casey’s work, my research argues New Zealanders instead viewed his plays as examples of British high culture — this was especially relevant given the perceived threat of American cinema and broadcasting in the late 1920s and 1930s. For example, when the Wellington Repertory Society performed Juno in 1937, the Evening Post framed the event as a courageous milestone for New Zealand theatre. In this way, Sean O’Casey’s high cultural reputation was leveraged at the expense of his political message, and was used instead to showcase the talents of the Society’s performers.

The golden age of Amateur theatre had begun and, in 1938, facilitators like the British Drama League — who recorded 12,000 members involved in 460 dramatic groups and societies — were shaping pre-war culture in the image of the British and Irish theatrical reviews published in our newspapers.

Why did the subject appeal?

I have always been fascinated with the social, cultural, and political pressures that shape responses to literature, film, and theatre. Back in Dublin a play like The Plough and the Stars, which caused a riot in the Abbey Theatre, was quite obviously a critique of Irish hero worship; however, to the New Zealander, who was so far removed from the politics of the revolution, The Plough had an almost photorealistic ability to transport its audience to the Dublin streets during Easter Week. Likewise, when John Ford adapted the play for RKO in 1937, he actually removed O’Casey’s hero critique, added an action-packed rooftop chase sequence, and turned the moral into a celebration of Irish freedom. With a medium like theatre, the qualities of an ‘original’ performance remain contingent on a particular producer, cast, and audience. So, what happens if you use a new cast, or perform in a different city years later? I wanted to see how this instability could lend itself towards new interpretations, and wondered what it might reveal about New Zealand’s unique cultural perspective.

What do you hope to do in future?

In the future, I hope to capitalise on the connections the Irish and Scottish Studies Centre has made around the world. Ideally, I’d love to start a PhD in Ireland or the UK – in late 2019 or early 2020 – and continue my work on historical reception. I would love to continue researching the history of amateur societies, since they are frequently overlooked. Right now, however, I am looking for a job to support me while I conduct research on George Bernard Shaw’s tour of New Zealand in 1934.