Book on the history of New Zealand youth culture launched 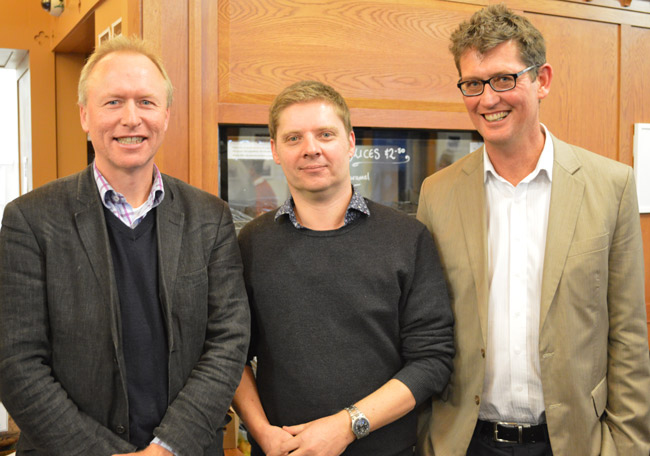 Associate Professor Chris Brickell of Gender Studies celebrated the launch of his new book Teenagers: The Rise of Youth Culture at the Staff Club recently.

Published by Auckland University Press the book is a cultural history project investigating the changing nature of New Zealand’s ‘transition to adulthood’ between 1800 and the mid-20th century. Exploring the intricacies of New Zealand’s past through 230 black and white and colour photographs and oral histories, letters and diaries, Teenagers aims to give global context to the local New Zealand development of the age of adolescence.

Associate Professor Brickell says he has long been interested in hidden histories, histories of lives that tend to be overlooked.

“I became increasingly interested in what it meant to read New Zealand history and society through the prism of young people’s experience.”

He began the research for the book in 2008, visiting and corresponding with around 50 libraries and archives around New Zealand from Kaitaia to Invercargill.

“Quite a few road-trips went into the making of the book,” he says

“I was browsing at the Alexander Turnbull Library in Wellington and began looking at old albums full of snapshots of young New Zealanders. The camera became widespread during the early decades of the 20th century and young New Zealanders often asserted themselves in front of it, but they had, by and large, been written out of the bigger New Zealand story.”

Associate Professor Brickell’s previously published work focuses on the history of New Zealand gay culture and young people in New Zealand, and he also looked at at particular aspects of the youthful experience such as the shape of sex education in New Zealand history and how ideas of pleasure and sensation helped shape the very idea of New Zealand adolescence during the 19th century.

“These journal articles fed into the book, providing useful context and in many places, thematic starting points.”

At the book launch, Director of Auckland University Press Sam Elworthy spoke to the crowd, noting Chris’s eye for photographs and calling his book “a triumph of pictures as well as words.”

Associate Professor Brickell says in learning about adolescence in New Zealand, he gained a deeper appreciation for the complexity of New Zealand’s social patterns. Although there are many differences between the lives of 15-year-olds in the 1860s and today’s youth, he explains that the idea modern life leads young people astray is not remotely new, and many 19th century adolescents were just as wary of adult sanctimony and hypocrisy as their modern counterparts.

“The focus on this book is young people’s own words and opinions. What did adolescents think about their own lives?”